Coffee chain says it is a ‘compliant and good taxpayer’, but disclosure has led to calls for an inquiry into its tax affairs

Starbucks has paid just £8.6m in taxes on a reported £3bn in UK sales since 1998, when it launched its first UK coffee shop, despite having opened 735 outlets, according to research by Reuters.

The disclosure led to calls by pressure groups and MPs for an inquiry into the company’s tax affairs, which one MP called scandalous.

In the past three years, Starbucks paid no tax on its UK earnings after recording annual losses in company accounts, despite US executives of the Seattle company claiming in telephone calls with investors, transcripts of which have been seen by the news agency, that the UK business was profitable.

The contradictions highlight legal tax-avoidance tactics used by multinational companies by loading UK subsidiaries with debts from other parts of the business based in countries with lower tax thresholds.

In 2007, the chief operating officer, Martin Coles, told analysts in a fourth quarter results presentation that the UK unit’s profits were funding Starbucks’ expansion in overseas markets. The chief finance officer at the time, Peter Bocian, added that the UK division enjoyed operating profit margins of almost 15% that year, equivalent to nearly £50m in profit.

Accounts filed with Companies House, which must be a truthful reflection of the business, according to HM Revenue & Customs (HMRC), showed a 10th consecutive annual loss.

A year later, after filing a £26m loss in the UK, Starbucks’ chief executive, Howard Schultz, told investors the business here was so successful he planned to apply the lessons to the company’s biggest market in the US.

Michael Meacher, the Labour MP for Oldham West and Royton, who has campaigned against companies that use tax avoidance techniques, said: “HMRC should be having a look at this, especially since they keep saying there should be a crackdown. This has been going on for years and there are many companies involved.

“The fact they have paid 0.3% tax on their turnover is utterly scandalous. If they didn’t think they could get away with it, they wouldn’t dare do it.”

HMRC said: “For legal reasons, we cannot comment on the tax affairs of individual businesses, but we make sure that multinationals pay the right tax to the UK in accordance with UK tax law.

“Our tax rules combat tax avoidance and we employ specialist tax professionals to ensure that multinationals play by the rules.”

Anna Walker, a spokesperson for UK Uncut, which attempts to highlight companies that fail to pay their fair share of tax, called on the government to change the law to stop what she called “unfair and unjust behaviour”, adding that the organisation had Starbucks “in its sights”.

She said: “The government must take action so that this country has a fair tax system ensuring that hugely profitable companies like Starbucks pay the right amount of tax.”

There is no suggestion Starbucks has broken the law and the company’s worldwide tax rate was 31% last year, compared with an average of 18.5% for multinationals. However, it paid an average of 13% on overseas income, one of the lowest rates in the consumer goods sector.

Starbucks said: “We have paid and will continue to pay our fair share of taxes in full compliance with all UK tax laws, as we always have. There has been no suggestion by any authority that we are anything but compliant and good taxpayers.

“We do this in a way that is consistent with the values that have guided us since we were founded more than 40 years ago: balancing our need to operate a profitable business with a social conscience.” 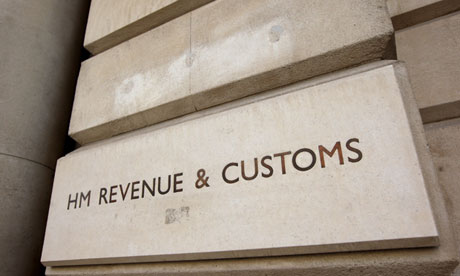 HM Revenue & Customs in London. There is no suggestion that any of the firms identified as paying low taxes in the UK have broken any laws. Photograph: Oli Scarff/Getty Images

The UK government is coming under mounting pressure to stop dragging its feet on reforming international tax rules in the wake of revelations that Starbucks and other large companies are shifting profits around the world and paying small tax bills.

The calls come after a string of controversies over the low levels of tax paid by US companies operating in Britain, while analysis by the Guardian shows that four of America’s best known businesses – Amazon, Facebook, Google UK and Starbucks – have paid just £30m in tax over the past four years despite generating more than £3.1bn in sales.

As well as shifting profits outside the UK, campaigners also argue that the current system leaves a higher burden falling on British companies.

Richard Murphy, of Tax Research UK, said: “The [UK] government says that it has created a competitive tax system. The problem is that UK companies are paying the tax and the result is that it is an uneven playing field. UK businesses are disadvantaged against foreign businesses in the same market place. They are letting foreign companies do business here and not pay any tax.”

Murphy’s criticisms of the current system were echoed by David Spencer, a US attorney and adviser to campaign group Tax Justice Network, who said: “There is more and more evidence of the fact that multinationals are shifting substantial income from high tax to low tax jurisdictions. This is because the OECD’s [rules] are very complex and very difficult to enforce.” So abused have tax rules become, he added, that even the best resourced tax authorities – in OECD countries themselves, including the US – were straining to police the corporate world.

The calls for a revamp come after it emerged on Monday that the US coffee shop chain Starbucks had paid £8.6m in UK taxes on £3bn of sales since 1998, while last week Facebook UK – which paid its average employee more than it did the exchequer last year – was accused of depressing UK sales figures. Neither the Treasury or HM Revenue & Customs would comment on specific cases. A spokeswoman for the Treasury said: “The government is committed to ensuring that the right amount of tax is paid on all profits made in the UK.

“Companies which are resident in or have a permanent establishment in the UK are subject to corporation tax on the profits from their UK trading activities, including e-commerce. Cross-border trading is taxed in line with OECD guidelines and the UK’s wide network of tax treaties. These ensure that businesses are not taxed twice on the same profits and that British companies can compete effectively globally.”

A Revenue and Customs briefing paper earlier this month said: “Recent reforms to the UK’s corporation tax system mean that the UK has an internationally-competitive corporate tax system, which is designed to attract and retain economic activity here.”

John Christensen, a director of TJN, also said pressure was mounting on Europe and US to overhaul what he said were increasingly abused and discredited rules governing how multinational companies can apportion profits around the world. Speaking outside the annual meeting of the UN committee of experts on international tax co-operation in Geneva, Christensen said current guidelines from the OECD were under attack from increasingly powerful countries, led by India, China and Brazil. “The emerging countries say they don’t want the OECD model any more. There is widespread recognition these rules are no longer fit for purpose. But until there is agreement abusing will continue – costs will be piled up artificially in some countries or profits are shipped out to low tax countries.”

Emerging economies want the rules to be overhauled so that multinational companies are required to apportion their taxable profits according to factors such as where in the world sales are made, where the workforce is located and where capital is invested. Such tight rules are already well-established within the US, but they do not affect how American groups behave internationally. Moves toward tighter apportionment rules are most fiercely resisted in Europe by countries with the most aggressively competitive corporate tax arrangements, among them Ireland, Britain and the Netherlands.

Before this week’s meeting of the UN tax committee, the body’s head of tax co-operation, Michael Lennard, received a lobbying letter from the US Council for International Business urging the UN to rethink or ditch elements of its campaign to reform tax rules for multinationals. Members of USCIB include Amazon, Apple, Google, Hewlett-Packard and Microsoft.

There is no suggestion that any of the companies that have been identified as paying low taxes in the UK have broken any laws, and all say they comply with local tax rules.

Google has said it makes “a big contribution to the UK economy by employing over a thousand people”, while Facebook, which last week was accused of transferring UK profits to Dublin, said it had selected the location as its international headquarters as it was “the best location to hire staff with the right skills to run a multilingual hi-tech operation serving the whole of Europe”.

TAX IS FOR LITTLE DISABLED PEOPLE

Investigation into the board of Directors at HMRC reveals connections to potential tax avoidance.

There is an alternative: The case against cuts in public spending

THE TRUTH ABOUT CONDEM TAXATION: How the coalition actively aids and abets wholesale corporate tax avoidance of £120 bn p.a. while Britons suffer

3 thoughts on “TAX INJUSTICE SCANDAL: Starbucks ‘pays £8.6m tax on £3bn sales’ ~ If corporations like this paid fair taxes disabled people would not be dying of neglect”