The nasty department: DWP threaten to take disabled children away from parents

Iain Duncan Smith’s Department for Work and Pensions have plumbed new depths with reports today of threatening, menacing letters being sent out to parents of disabled children, ordering them to do as they say or risk having their children taken into care. 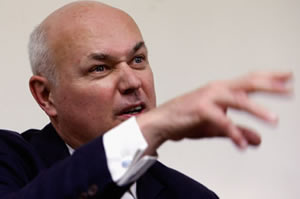 The full, shocking story is revealed by Alice Dunn in Indy Blogs this morning:

At a time when the Tory Party is desperately trying to shake off its ‘Nasty Party’ image, this turns up on our doormat – literally.

This is a letter from the DWP, the government department responsible for, among other things, benefits. It is a routine letter that was sent to my mother as a claimant of Disability Living Allowance (on behalf of my disabled brother) containing a thinly veiled threat to take my brother into care if she didn’t do as the DWP said.

The opening paragraph states that they, the DWP, “are writing to review your role. We want to ensure the appointeeship is working well and that there are no issues we need to address”. As far as we know, this disgraceful missive was sent out to the parent or guardian of every child in receipt of DLA when renewing their claim. This new letter, the ‘BF57B’, was recently introduced by the DWP and the form has to be signed and returned before the claim can move forward.

It is, in my opinion, a particularly damning indictment of the government’s attempt to demonise those on benefits, and particularly the disabled: to portray them as lazy, feckless scroungers. The letter ordered my mother to “always act in the best interests of the child”, then gave her a bullet point list of what this included, such as “manage and spend any money from Disability Living Allowance in a way that best serves [the child’s] best interests”.

Effectively, the DWP is assuming my mum would, (had she not received the letter), be spending my brother’s money on cigarettes, alcohol, and satellite TV. Is assuming the worst of a parent claiming benefits not rather insulting? It is also worth noting she has never received such a letter telling her how to spend the child tax credits received for her two children without disabilities nor was she sent it with the annual child benefit award notice.

Believe it or not, it gets worse. Underneath this bullet point list, is the sentence “We will review your status as an appointed person if we think that you are not acting in the best interests of the person named above.”My mother has not been ‘appointed’. She claims DLA on behalf of my younger brother because she is his mother – he is only seven so can’t receive the funds directly. In both my mother’s opinion, and my own, what they’re essentially saying is: ‘we will take your child away from you if you don’t spend this money properly’.

The DWP has assumed because my mother is claiming disability benefits on behalf of a disabled child she is going to use the DLA for herself and has been threatened by the DWP accordingly.

Does this not act as direct evidence of – at least some – demonisation toward the disabled? Research for the charity Scope found that 46% of the 500 disabled people, their carers and parents polled, said people’s attitude towards them had worsened in the last year. Nearly two-thirds (64%) said they had experienced aggression, hostility or name calling. When asked what could be contributing towards such hostility, 87% singled out people claiming disability benefits to which they are not entitled…

Perhaps the DWP could look a little closer to home whilst they are “working to change negative assumptions” about disabled people and their families and stop sending out letters that assume the parents of disabled children are lazy, feckless scroungers.

Quite. It is not coincidence that attacks on disabled people increase the more the Tory-led government and their right-wing tabloid cheerleaders demonise them – the more IDS and the DWP continue down this path of cruelty.

• Will the government take away money from disabled people on a hunch? 17 Jan 2012

• Time to step forward on the Spartacus report 9 Jan 2012

6 thoughts on “The nazti department ~ Revealed: DWP’s implicit threats to parents of disabled children to remove them”