“I found out that one in five households has never ever had work.”

In the House of Commons, he claimed that one in five unemployed households contains a member who has never had a job.

He also told the Telegraph that one in five households has never had work, a subtly different take on a similar theme.

To what extent are either of these claims true?

How many unemployed households have never had work?

The Office for National Statistics (ONS) released figures on working and workless households in September 2011.

Table E of the ONS data sets out the data for households in which no member has ever worked. It is immediately apparent that Mr. Field’s statement in the Telegraph is a long way off the real figure. 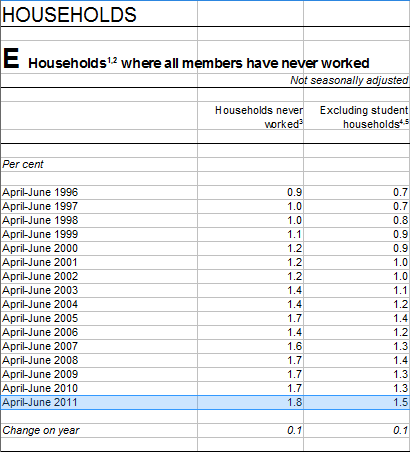 This is drastically different from Mr Field’s claim in the Telegraph, which is that one member in one in five households has never had a job. In fact, it would appear to be that this is the case for just under one in fifty households.

The ONS does note that the proportion of households that are currentlywithout work is approximately one in five:

“The percentage of households where no adults work was 18.8 per cent.”

Mr Field’s claim, however, is very different to this. At the time of writing, it has actually been removed from the Telegraph article, although Liberal Conspiracy and others have also noted the mistake.

The Telegraph article itself does not appear to have been properly corrected however, and readers returning to the amended online article are given no clue that an important change has been made. We will therefore be contacting the Telegraph to ensure that it corrects the record properly.

Do one in five unemployed households contain a member who has never had a job?

So what are we to make of Frank Field’s claim in the Commons, where he used a slightly different formulation of the claim?

It is difficult to judge the accuracy of this statement one way or the other, as the ONS doesn’t break the figures down in quite this manner.

We don’t have information on how many members per household have never had a job. As such, it’s difficult to see how Mr Field came to the specific claim that, in one in every five households which are entirely unemployed, at least one member has never been employed at all.

We’ve been in touch with Mr Field’s office to request that he either provides the extra evidence that would be needed to stand up this claim, or that he corrects the record.

While we cannot verify the claim made in Parliament, we can at least firmly conclude that the (now removed) claim in the Telegraph was a long way from the real figure.

It’s encouraging that the Telegraph has removed the claim, but an acknowledgement that a mistake was made needs to be published to fully correct it.

Claims published on the websites of widely read publications such as the Telegraph can spread far and wide; simply removing information which turns out to be wildly inaccurate doesn’t do much to undo the damage done.

We look forward to being able to update when we’ve received a response from both Mr Field and the Telegraph.