I wonder if David Cameron is starting to get the message yet? If not, let me spell it out.

His much-vaunted Welfare Reforms are proving to be something of a turkey. In the first instance, his disability proposals were rejected by almost 100 per cent of people involved in a public consultation – although his Government chose not to include that information when presenting the proposals to the Lords.

In other words our Coalition paid, handsomely no doubt, to solicit opinion on the intended changes and when they didn’t like the answers that came back, they discarded them. Oh well, we’ve got plenty of money to spare, haven’t we?

In the end it didn’t matter, anyway, because the Coalition’s first round of planned cuts proved too extreme even for the gentrified and cosseted Peers in the House of Lords and were rejected out of hand.

In a series of humiliating and crushing blows, the Lords voted against all three of his new – and more cruelly improved – attacks on disability support.

Instead, the Lords’ chose to include a number of more responsible amendments to the proposals.

To the delight of campaigners, this included automatic eligibility to support for young disabled people  unable to work. In addition, the 12 month period for re-assessment would be extended to two years.

Sensible suggestions that will not make life an utter misery for the disabled and will not lead to unnecessary, and very costly, bureaucratic paperwork.

The third and final proposal that the Government were anxious to have rubber-stamped by the Lords – and they were represented in this act of no-mercy by Lord Freud and a willing number of Lib-Dem peers – was to subject cancer patients to testing time limits that failed to factor in human issues like progression and regression of the cancer.

That, too, received a firm ‘No’ as the Lords and Ladies voted, quite rightly, to make Cancer patients exempt from the time constraints.

Cameron is defeated on this occasion, but his aims for the disabled should not be underestimated. His Government have sent out a clear, and unequivocal, message to our disabled population.

Debate: Peers voted through an amendment that will allow young people unable to work because of disability to receive ESA, even if they have substantial means

It is this: in the eyes of the Coalition, they barely count. And there was me thinking that David Cameron and his toadies saved their opprobrium for the elderly and the poor.

For commentators and keen observers, alike, Dave’s reform pounding heralds an extraordinary start to the welfare reform bill voting season. Over the next few weeks more votes will take place on other controversial issues to do with disability benefit and how much support we, as a nation, are prepared to give our disabled.

Problem is, this Coalition – under the clear direction of David Cameron – haven’t played fair on this one at all. Notwithstanding their rejection of the public consultation, they also sought to manipulate the outcome by not adhering to the required time frames for the proposals.

The Lords’ found out about these dirty tricks and were clearly unimpressed.

This, it has to be said, was in no small part thanks to an incredible independent, and verifiable, study ‘Responsible Reform – The Spartacus Report’ which was released this week and received some three million tweets about it on the first day alone.

The Spartacus Report is a labour of love as well as desperation. Funded and compiled by a group of disabled people, several of them seriously ill, it has been driven by a phenomenally impressive on-line campaign that has been thorough and efficient.

See, there you go, disabled people do like to work, too, unlike the tabloid caricature who, according to recent Government spin, ‘would prefer to lose benefits rather than get out of bed’.

Contrary to popular myth, there are actually very few people claiming benefits who are work shirkers.

Reform: Over the next few weeks more votes will take place on related issues regarding how much benefit and support we are prepared to give our disabled

As the Daily Mail reported on Tuesday, the overall fraud rate for Disability Living Allowance is less than 0.5 per cent. Given that, you have to wonder why Dave is being so punishing with the disabled?

Most people are surprised to learn that disability fraud doesn’t even register as a full percentage, the way some people go on you would think that everyone in receipt of disability benefit is at it. Not so, Mr. Cameron.

And that, quite clearly, is where he is completely alienating the British public.

I believe that the British are essentially decent people. Of course we have our share of thieves and thugs – and many of them are in Whitehall and The City – but, for the most part, we are happy to distribute the wealth to those less fortunate than ourselves.

The problem for David Cameron is that his Welfare Reform policies show him up to be anything but those marvellous characteristics that the vast majority of us cherish, and his detached approach is meeting rejection and will continue to do so at increasingly rapid speed.

Partly, because it lacks fair play. One of the essential components of our national characteristic.

Given the levels of propaganda that this Coalition has put out to attempt to get people on-side with their punishing welfare cuts, you have to wonder are they completely devoid of morals as they continue to wage their war against our most vulnerable? 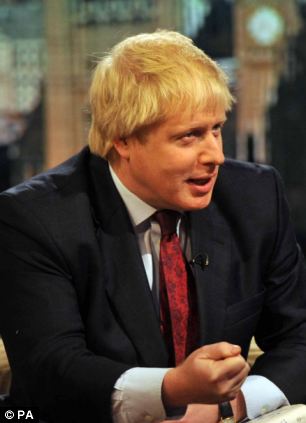 Steely: Ambitious Boris Johnson has realised that it may not be best to align himself too closely with the Prime Minister

Interestingly, too, his old Oxford Bullingdon Club mucker, Boris Johnson – the flamboyant mayor of London – realised that he would need to reject them outright, which he did, else he be tarnished by them.

The thing about Boris Johnson – or BJ as he’s known in our house – is that his foppish, silly boy charm belies a steele ambition and it has become increasingly obvious that it’s best not to align too closely with the PM. Certainly not when you have your eye on usurping that PM, anyway.

Personally, I am thankful it is not me claiming disability benefit. It’s no fun to be subjected to numerous and punishing assessments and appeals, and then appeals of the appeals.

It always seems like the benefit system is designed to make the life of disabled people as miserable as humanly possible. And that as a model for a so-called civilised society is entirely wrong. It reflects badly on us all.

To be clear, in my 47 years I have been fortunate to enjoy that one thing that if you don’t have it you are constantly reminded that it’s missing: my good health.

I’ve only been in hospital a handful of times – and one of those was to give birth – and I still left on the same day our daughter arrived.

I have seen illness and death up close as a genetic kidney disorder has taken my mother, grandmother and aunt and my brother has had a kidney transplant – but I have enjoyed good health and I try not to take it for granted.

I’m of the opinion that people get in where they fit in. For my part, I earn an income and I am more than happy to contribute to a society that takes care of our most vulnerable. That seems the right thing to do.

My big problem with Cameron (sub clause: right now) is the clear disparity in the way people are treated by his Coalition.

Let’s name the elephant in this room. We all know this Coalition puts business before people. The evidence is all there, doesn’t even take much digging to substantiate that claim.

Let’s see now. The bankers, through their incompetence and risk-taking, lost billions, we bailed them out and they still take bonuses despite their poor – and for some people, life destroying – performances.

The rest of us suffer the rising cost of living as a consequence of poor national and international money management and no action is taken. That’s not right.

Then we have large corporations and multi-national companies who receive ‘sweetheart deals’ which allow them, shall we say, ‘fortunate tax conditions’ and billions, literally, of tax goes unpaid as a consequence. That’s not right, either.

So who does the Coalition not favour then? Well that would be our most needy and dependable members of society.

I would love not to have to write these words, there are a million other injustices taking place in the world and my sights are set on all of them but the systematic humiliation and bullying of our disabled is one injustice in my own backyard that I can’t ignore.

I don’t see that there’s a choice there. If we don’t highlight the very real wrongs taking place, what hope have we of getting them right?  The thing is, David Cameron isn’t the man to do it. The problem for him is he’s starting to realise that, too.

1 thought on “Welfare reforms: Cameron defeated in the Lords…again. What a surprise!”