An average of 23 people are chasing every job in Britain, a report warns today.

The research paints a bleak picture of an economy which, it says, is ‘heading inexorably towards recession’.

Based on around four million job hunters, the study reveals that the type of work which has seen the largest increase in the number of applications is jobs which require no professional skills.

The report, by the recruitment website Totaljobs.com, says the fight for employment is intense, with the private sector failing to hire redundant State workers in sufficient numbers.

Over the past year, the number of applications for each job vacancy has jumped by more than 50 per cent for customer service, secretarial and retail roles.

On average, the report said 46 people apply for each customer service job, 45 for each secretarial job and 42 for each retail job.

John Salt, director of Totaljobs.com, one of the country’s largest recruitment websites, said: ‘The omens for 2012 are pretty grim. For starters, we are heading inexorably towards recession with no real end in sight.’ 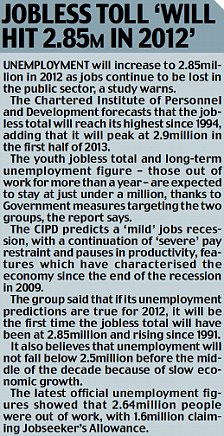 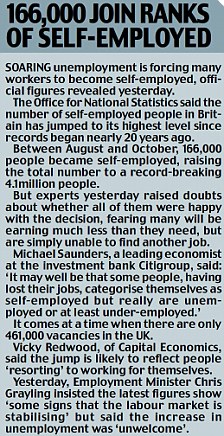 Overall, the website says there are 23 applications for each job, but the reality is far worse in some parts of the country.

For example, there is an average of 33 applications for each job in the South East, compared with only ten in East Anglia.

Mr Salt added: ‘Since March, the whole market has frozen, with companies reluctant to risk a rise in head-count when consumer confidence is taking a battering – and uncertainty around the future of the euro threatens to pull the whole economy back into recession.’

Dr John Philpott, chief economic adviser of the Chartered Institute of Personnel and Development, said: ‘The UK jobs market in 2012 will be weaker than at any time since the recession of the early 1990s.

‘The combination of worsening job shortages for people without work, mounting job insecurity and a further fall in real earnings for those in work may test the resilience and resolve of the UK workforce far more than it did in the recession of 2008/09.’

For workers who keep their jobs, the average pay rise will be 1.5 per cent, according to the CIPD, which is far below inflation, currently at 4.8 per cent.

In a sign of the jobs crisis, one in four firms predict that they will recruit ‘fewer people’ as a result of the Government’s decision to scrap the default retirement age this year.

Bosses used to be able to ask a worker to leave at the age of 65, but this is no longer possible. As a result, older workers are entitled to remain in their jobs for as long as they want.

Official figures also revealed yesterday that around 740 State workers are losing their jobs every day of the week.

Between July and September, 67,000 public sector workers were axed from the State workforce, which has shrunk to the lowest number for eight years.

But the figures, from the Office for National Statistics, paint a deeply worrying picture of a private sector which is ‘stalling’ and creating only a paltry number of jobs.

During the same period, just 5,000 new jobs were created in the private sector, which the Government is relying upon to rescue redundant State workers from the dole queue.

At the current rate, jobs are being lost in the public sector at a rate of 13 for every job being created in the private sector, a situation which is totally unsustainable.