“It is certainly not clear that the incidence of criminality is higher among benefit claimants than it is elsewhere, and it may in fact be lower” ~ Full Fact

Not only is The Daily Heil’s “official analysis [released] yesterday” non-existent and actually based on figures put out at the end of last year – the statistics, as usual, are grossly skewed to make out an argument which is utterly false and defamatory.

No great surprises there, then. The Heil seems to be determined to live up to its reputation as a modern-day Neues Volk and to take the maxim ‘you can’t believe everything you read in the papers’ to ever-greater extremes – ‘Can you believe ANYTHING you read in The Heil?‘ would arguably be a far more apposite statement these days – at least in as far as its reporting surrounding sickness and disability issues is concerned.

This deliberate and wanton demonisation of sick and/or disabled claimants is part of the ongoing campaign to defame them in the estimation of the general public, so as to trick the population into acquiescing in ConDem plans to systematically deprive disabled people of their fundamental human right to life, with dignity.

We are to be sacrificed the neoliberal altar of cuts and austerity for the poor – and ever-increasing private profit, privatisation and engorgement for the 1%.

Black Triangle has submitted a formal complaint to the Press Complaints Commission – that toothless and completely unreliable paper tiger so utterly unfit for purpose and incapable of fulfilling its role – and have copied the complaint to the Leveson Inquiry, for good measure. 23 July, 2012 – 16:32 — Jamie Thunder
Are one in four incapacity benefits claimants too sick to work, but fit enough for a life of crime, as the Daily Mail suggests?

“The findings from a Government research project show a high proportion of claimants who claim they are unfit for work appear to be fit enough to commit crime.”

Are a quarter of people claiming ‘sickness’ benefits fit enough to commit crime?

That was the claim that emerged in the Daily Mail this Saturday, citing an “official analysis [released] yesterday” as proof.

Confusingly, no such story appeared on the Department for Work and Pensions (DWP) website on Friday. However  several suspiciously similar stories about benefit claimants did appear at the end of last year: The Mail, the Star, the Express, and the Telegraph all reported the findings of joint research by the Ministry of Justice (MoJ) and DWP into the link between benefit claimants and criminality, while Employment Minister Chris Grayling gave a similar quote to that in Saturday’s Mail.

A quick call to the DWP press office confirmed that these were the figures in question, with the Mail seemingly mixing up its timings.

So dating aside, do the claims stack up?

This makes it possible to trace the employment and benefit history of individuals who have been cautioned for or convicted of offences. In total, 3.6 million people who received a caution or conviction in England and Wales between 2000 and 2010 and have a benefit and/or employment record during the time are included.

Table 1.4 of the report shows that of the 1.6 million people receiving Incapacity Benefit on December 1 2010, 21 per cent had received a caution or conviction in the previous 10 years, as the Mail reported.

The same table shows that 28 per cent of Employment Support Allowance recipients (ESA is replacing Incapacity Benefit) have a criminal record, although these figures can’t be added together. 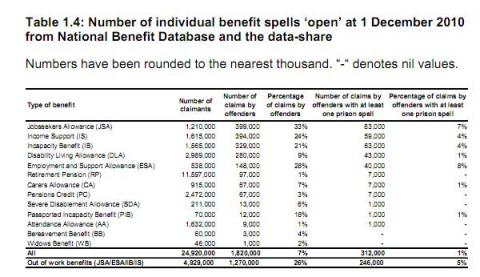 But what about the suggestion that these people are claiming to be too ill to work while being fit enough to commit crime?

Here it gets trickier. Someone could have been convicted of an offence in 2001 and legitimately claimed incapacity benefit in 2007, but they would show up as an IB recipient with a criminal record even though the criminality occurred several years before the person started claiming benefits.

A better way to measure this might be to look at whether offenders were claiming benefits near to the time of their sentencing. 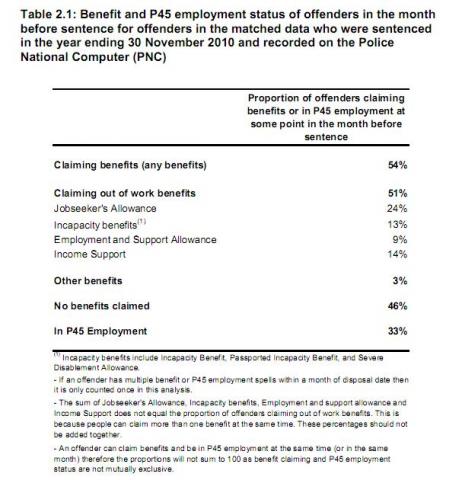 This is still subject to caveats. The report’s methodology notes that not everyone recorded as being on a benefit will necessarily be receiving it:

There can also be a long period between an offence being committed and sentencing, which could underestimate numbers on benefits:

“For a number of reasons, it is possible for offenders to be convicted (found guilty) and for there to be a delay between the conviction and sentence date. In these instances, it is possible that benefits are stopped or P45 employment spells are ended as soon as the offender is convicted. Therefore this analysis may underestimate the proportion of offenders who are claiming benefits or in P45 employment, and care should be taken when interpreting the findings.”

Nevertheless, this looks like the best available measure of how many people claiming sickness benefits commit crime: 13 per cent, or one in eight. However it’s also worth pointing out that being able to commit a crime does not necessarily mean someone is fit to work. Certain crimes, such as drug possession, could be committed by incapacitated and ‘fit’ offenders alike.

How significant this figure is can be disputed. As others have pointed out, the Chartered Institute for Personnel and Development (CIPD) has claimed that a quarter of the general population have a criminal record.

It’s surprisingly difficult to find data on the proportion of the general population with criminal records that might support this claim.

An answer to a Parliamentary Question in 2008 points to research from 2001 which followed the fortunes of groups of people born between 1953 and 1978. By 2001, 33 per cent of male subjects born in 1953 had convictions, as did 9 per cent of women – although it doesn’t give an overall percentage. The most recent cohort, however, seems to be picking up convictions rather slower than the others, as the chart below shows: 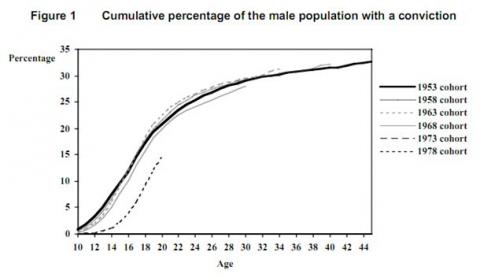 These figures don’t include cautions, however, making it difficult to compare to the DWP research – a task made harder by the fact that the DWP’s study only looked at a decade.

Nevertheless, it is certainly not clear that the incidence of criminality is higher among benefit claimants than it is elsewhere, and it may in fact be lower.

The Mail is correct in stating that 21 per cent of incapacity benefit claimants committed an offence of some sort between 2000 and 2010.

However, it’s on shakier ground in saying these people “claim to be unfit for work [but] appear to be fit enough to commit crime”, as only 13 per cent of offenders claimed a sickness benefit in the month before they were sentenced.

It’s also dubious as to whether these are “truly alarming” figures as the article claims, and when compared to the best information we have on the prevalence of criminal records in the general population, the claim seems less striking.