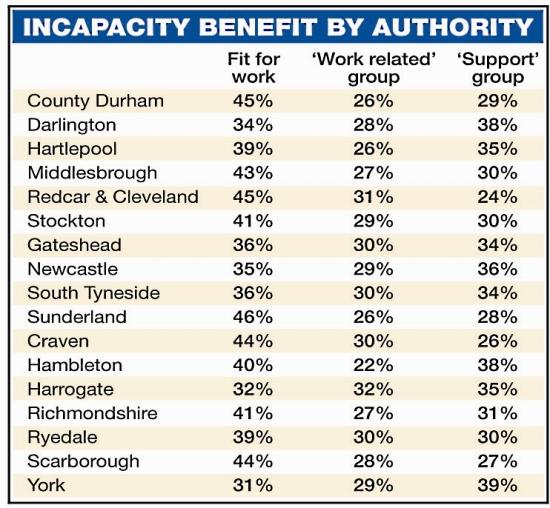 UP to 50,000 people will be forced off sickness benefits across the region by a tough new work test, the first analysis of results suggests.

About 40 per cent of incapacity benefit (IB) claimants are being found fit for work and placed on jobseeker’s allowance (JSA) instead – losing at least £28 a week in benefit.

But a further 28 per cent are being placed in a “work-related activity group”, after being assessed as able to look for a job in the future, with extra support.

That means they will be moved onto JSA after one further year, if they have a household income because their partner works, or sufficient savings.

In County Durham, nearly half of those tested were told to look for a job immediately – while, in Redcar and Cleveland, fewer than a quarter were found to be unable to work.

The results come from the first work capability tests on about 8,000 IB claimants in the North-East and North Yorkshire, which began a year ago.

It’s much better to help people on the journey back to work than to leave them on benefits for the rest of their lives.”

But the Government’s intention is to re-test more than 90,000 claimants across the region over the next two years, about three quarters of the total number – leaving out only those close to retirement age.

If the same proportion of about 60 per cent are found fit for work, either immediately or with help, that could take sickness benefits from 50,000 people or more.

Work Minister Chris Grayling said the results showed the current system to be “a waste of human life”, adding: “Too many people have been left languishing on benefits for too long.

“We are providing support to those who need it, but it is right that those who are able to work should do so. It’s much better to help people on the journey back to work than to leave them on benefits for the rest of their lives.”

But the release of the statistics immediately triggered controversy, because Mr Grayling failed to reveal how many claimants are winning appeals in each area.

Across the country, 400,000 people have appealed since 2009 and about 40 per cent were successful – prompting criticism that the tests are flawed and are wrongly finding sick people fit for work.

People with “fluctuating” conditions, such as epilepsy and Asperger’s syndrome, regularly fail the test, only to later win appeals. Tribunals are clogged up.

This month, the chief executive of the mental health charity Mind resigned from the Government’s advisory panel on the work tests after condemning them as inhumane.

1 thought on “50,000 across North-East and North Yorkshire to lose sickness benefit”