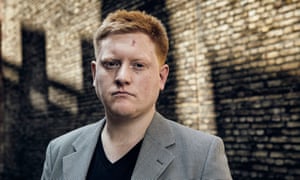 A newly-elected disabled MP has accused the Conservative government of introducing policies inspired by “eugenics” in the hope that disabled people will “suffer and die”.

Labour’s Jared O’Mara spoke out just weeks after beating former deputy prime minister Nick Clegg to win the Sheffield Hallam seat and become one of just a handful of disabled MPs in the House of Commons.

Speaking to Disability News Service (DNS) for the first time, O’Mara said he knew that his comments on eugenics* and the government would be controversial.

But he said he firmly believed that Tory ministers had “completely torn up the welfare system” which had previously supported disabled people, particularly through cuts and reforms to disability benefits, the decision to close the Independent Living Fund, and cuts to social care.

He said: “A lot of people say you can’t use that word, but I will do: it’s eugenics.

“Disabled people are out there suffering and dying because they have not got the financial means and financial support and nor have they got the legal means to lead an equal life, or even to lead a satisfactory life.”

Among the evidence he points to are reports of people with mental health conditions who have been asked by personal independence payment assessors why they have not taken their own lives.

He said: “How is that not eugenics? Putting thoughts of suicide into a disabled person’s head. It’s literally eugenics.

“I’m not going to shy away from it, people might say I am taking it too far, but as far as I am concerned, what I have seen and what has happened across the board, it’s been eugenics.”

He promised that he would be “taking no prisoners” as an MP, and would “call them out on this”.

He said: “There are people just like me and people who have got conditions that make things even worse for them than mine does, and they are dying and they are suffering.

He pointed also to Iain Duncan Smith, who in 2010, shortly after becoming work and pensions secretary, appeared to echo the phrase “arbeit macht frei” – which was written over the entrance gates of Auschwitz – by telling a BBC journalist: “Look, work actually helps free people**.”

He said he “absolutely” endorses efforts by user-led anti-cuts groups such as Black Triangle to secure a criminal prosecution of Duncan Smith and fellow former work and pensions minister Chris Grayling.

In December, Scottish criminal justice agencies rejected pleas to investigate the refusal of the two ministers to improve the safety of the government’s “fitness for work” test, despite evidence that that refusal caused the deaths of at least three benefit claimants with mental health conditions, and probably many more.

Police Scotland had been asked to investigate allegations of “wilful neglect of duty” by Duncan Smith and Grayling, after it was passed a dossier containing details of the deaths of three claimants with experience of mental distress by Black Triangle.

The three claimants took their own lives in 2011, 2013 and 2015 as a result of grave flaws in the work capability assessment (WCA).

These flaws mirrored those uncovered by a coroner in January 2010, following an earlier suicide, and passed to DWP just a few weeks before Duncan Smith and Grayling took up their new posts following the May 2010 general election.

Duncan Smith and Grayling failed to act on the coroner’s warning, which campaigners and families of some of those who died believe led to further deaths.

O’Mara said: “The legal system is ‘innocent until proven guilty’. We need to ascertain that with what Iain Duncan Smith and Chris Grayling did.

“I believe there is a case to answer and they should go there. I support that campaign without reservation.”

Another issue he was keen to raise with DNS was the importance of ensuring that disabled people – and their families – are included in the decision-making process on new policies.

“Families need to be included in that process. They have a lot of experience and acumen in that field.”

Decisions, he said, should not be taken solely by politicians who “have never had to face these barriers and these problems”.

He added: “Anything that comes up to do with disabled people, disabled people should be at the epicentre of that decision-making process and that policy and legislative process.”

O’Mara has also spoken out this week on the access barriers he has already faced in his first weeks as an MP, and has told DNS that might have to be “in the vanguard for this” and “grin and bear the fact that it’s not perfect for me, and try and make it perfect for future disabled MPs” (see separate story).

He said: “I want to get more of us here. I’ve got to make it a better place for them.”

The first early day motion he signed as an MP was one calling on the government to reopen the Access to Elected Office Fund, which helped disabled people with the extra disability-related costs of seeking elected office, but has been closed since the 2015 election (see separate story).

But although he is keen to highlight disability issues as an MP, O’Mara insists that it will not be his only interest.

His previous career in promoting live music and working in the pub trade has given him an interest in “ensuring we have a vibrant night-time economy”, and in supporting arts and culture, and not just music.

And he said that he will ensure that he maintains a “healthy work-private life balance”, despite the pressures of his new life.

He said: “I have managed to go to the pub several times [since the election] and I will keep going to the pub.

“I’m really passionate about pubs and clubs and nightlife and I always will be.”

Despite having worked for nearly a year earlier in his career as a press, parliamentary and campaigns officer for the British Council of Disabled People, his views on another key rights issue could lead to disagreements with the disability movement.

O’Mara, who himself has cerebral palsy (cp), is a long-standing trustee of Paces, a specialist centre in Sheffield for children with cp which specialises in conductive education*** and also runs a special school, of which he is a governor.

And he told DNS that – although the UN disability convention demands an “inclusive education system at all levels” – he believes that mainstream schools are “horrible environments for disabled kids”.

He was educated in a mainstream school throughout his education, and he said: “All I had was misunderstandings and mistreatment and bullying about having a disability.

He said that schools like Paces “provide a really good standard of education for kids with severe cerebral palsy, and often with learning difficulties”.

He said: “There’s a place for them and I’m passionate about it because they help kids get a better standard of education and a better life and alleviate the symptoms of cerebral palsy as well.”

He added: “I’ve known a lot of people that have been in mainstream schools and it’s always the same.

“I have never heard of anyone with a disability coming out of a school without being bullied, and I was bullied by one of my teachers for my disability as well.”

He said mainstream education would not be an “ideal and happy environment” for disabled children “until they get disability equality and disability awareness right in mainstream schools”, with disability rights a statutory part of the national curriculum.

O’Mara said he was aware that these comments were likely to prove controversial, but he said: “I can only talk from my own experience and from other people I have known.

“If there are disabled people who have been to mainstream schools and want to come out and say that all of the kids were so sensitive and understanding and knew everything [about disability], and all the teachers were great and they got all the adjustments they needed, then I would be happy to hear that, [but] I haven’t heard about it yet, I haven’t even heard one story.”

**The words can be translated as “work makes free”, “work makes you free” or “work brings you freedom”. The writer and Holocaust survivor Primo Levi thought the Nazis meant these words ironically

***The disability charity Scope, an advocate of conductive education, describes it as a system of learning that “teaches those with movement difficulties to learn actively to achieve purposeful movement which can then be applied throughout daily life and learning”.