Karen Rowlingson argues that the unprecedented reforms to the social security system are set have the greatest impact on the most vulnerable in society. Recent data shows that two-thirds of children in poverty are living in working families, suggesting that work clearly isn’t working as a route out of poverty and that the tax credit/benefit system is playing a major role in supporting people in work. We should not only maintain a strong welfare system but we must also take a fundamental look at the nature of our market economy.

The UK economy went off the rails in 2008 with a massive increase in unemployment, particularly for younger people. But the social security system did its job, to some extent, enabling many to avoid the worst consequences of recession. Various welfare reforms introduced or enacted since then, however, will now mean that the poorest will see their incomes hit the hardest.

The train is about to crash unless we abandon the reforms and re-build a system which provides effective social security for all.

The IFS has confirmed that the current downturn is the longest and deepest slump in a century and while the better-off were hit hardest by the recession initially (due to falls in earnings), the impact of the recession is now set to hit the poorest hardest (due to cuts to the social security system).

Figures released by the Office for National Statistics already show that there were nearly a million more people in absolute poverty in 2011/12 compared with 2010/11 and the IFS estimate that there will be over a million more children in poverty by 2020.

The main reason why the poorest will be hit hardest in the next few years is that unprecedented changes to the social security system will begin to bite.

These reforms include the following:

These reforms to the social security system are more fundamental than those introduced in the 1980s by the Conservative government of that time. In particular, the new caps to benefits and the fact that that the value of means tested benefits will be cut relative to inflation will punch massive holes into our already inadequate safety net.

Means tested benefits are already far from generous for people of working age. Research by the Minimum Income Standards team at Loughborough University shows that safety net benefits for single people in 2011 gave them only 40 per cent of the income they would need to have an acceptable standard of living. A couple with two children had only 62 per cent of what they would need and a lone parent with one child only 64 per cent.  The percentages for all groups had been declining from 2008 to 2011 but these benefits have, until now at least, been linked to inflation (see figure 1). 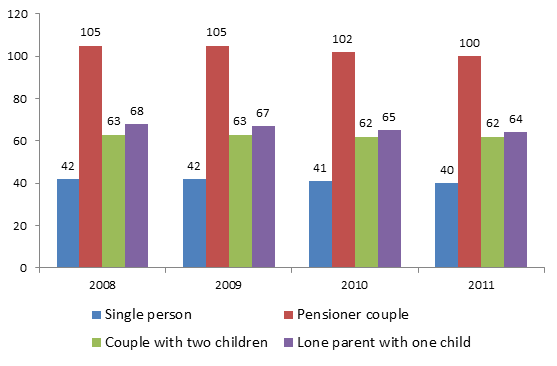 As the figure, above, shows, pensioners have generally fared far better and been protected from the impact of the recession but the Labour party’s proposal to means-test Winter Fuel Allowance suggests that spending on pensioners may soon also come under attack.

The Labour party’s proposal is also interesting in that it strikes at the principle of universalism which has already been breached by the Coalition government’s means testing of Child Benefit. Child Benefit was one of the key bastions of universalism in the British social security system. It survived the 1980s cuts but has now fallen victim of means testing under the Coalition. Universal benefits can be seen as a ‘luxury’ in hard economic times and cutting them may not seem to directly affect the poorest but when the social security system becomes more residualised through means-testing it creates an even greater illusion of ‘us’ in work and ‘them’ on benefits.

Social solidarity is likely to erode further, along with support for the system among the better off.

Basic, means-tested benefits are under attack alongside universal benefits. The social security system is re-labelled ‘welfare’ and those on benefits called ‘shirkers’ and ‘skivers’ in contrast to the ‘workers’ and ‘strivers’. But the ONS figures also show that two-thirds of children in poverty are living in working families. Work clearly isn’t working as a route out of poverty and the tax credit/benefit system is playing a major role in supporting people in work.

There is no simple divide between those on benefits/tax credits and those in work.

Can we avoid the train crash that will plunge millions of people, particularly children, into poverty and deprivation in the next few years?

Central to this would be to re-build a strong social security system to support people at times when the market economy fails.  But we also need to take a fundamental look at the nature of that market economy.

The seeds of the current crisis were sown in the 1980s when labour lost the battle against capital. We need a new settlement between the two and to do this we need to re-establish stronger collective worker representation. We also need a political leadership than can challenge the dominant but highly dysfunctional ideology of neo-liberalism.

Note: This article gives the views of the author, and not the position of the British Politics and Policy blog, nor of the London School of Economics. Please read our comments policy before posting.

Karen Rowlingson is Professor of Social Policy and Director of CHASM (Centre on Household Assets and Savings Management) at the University of Birmingham.  She has recently co-authored a book on ‘Wealth and the Wealthy: exploring and tackling inequalities between rich and poor’ with Stephen McKay.