Thanks to the alert reader who pointed us at a Plymouth Herald story today about lovable UKIP candidate and teacher of British children, the charming Ron Northcott.

A UKIP politician has “fallen on his sword”, after abusing Scots people on the social media site Twitter. Ron Northcott, a former election candidate in Plymouth for the UK Independence Party, resigned from the party yesterday. David Salmon, UKIP’s Plymouth chairman, said:

“Ron is not talking to any member of the press. I can say that following the appalling behaviour of some Scots against Nigel Farage, Ron was involved in what he describes as banter with a Scot living in London.

His out-of-character remark was unacceptable and he has stood down with immediate effect as a potential candidate for next years elections. We in no way condone his language and the sentiments expressed. He has stepped down and will be leaving UKIP.”

Northcott’s “banter” came to light because this site highlighted it and posted it on Twitter, where at the time of writing it had been seen by over 8,000 people. You can read the now-deleted badinage below.

Mr Northcott’s merry quippery wasn’t quite as “out of character” as Mr Salmon is attempting to make out, though. There’s some rather familiar-sounding rhetoric, stretching back to 2011, on Ron’s old Twitter account (closed down last summer) too: 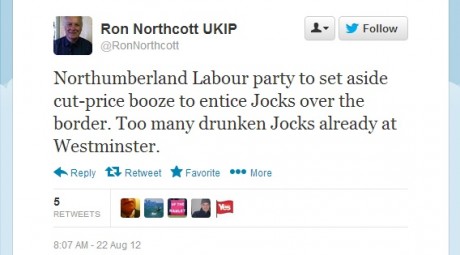 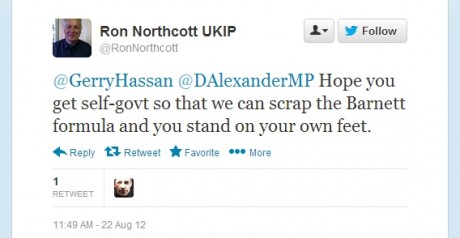 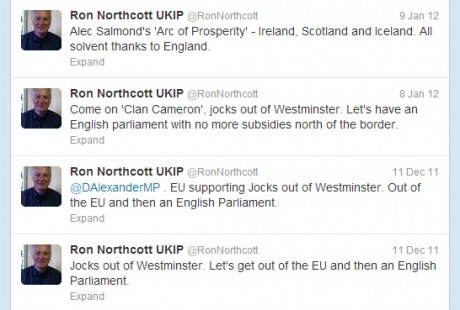 Classy stuff. Wings Over Scotland – cleaning up British politics, one nutter at a time.