Since 1997, and particularly since 2001, what passes for the political ideology of the Labour Party in Britain could be accurately summed up in one short phrase:

Protected by the grossly undemocratic First Past The Post electoral system – which discriminates massively against third parties and ensures that Labour or the Tories can secure huge, unassailable majorities on barely more than a third of the vote – Tony Blair’s brilliant, ruinous flash of political inspiration was the willingness to fully grasp the implication of that fact: that Labour could effectively all but become the Tories and still capture the left-wing vote, because it had nowhere else viable to go. 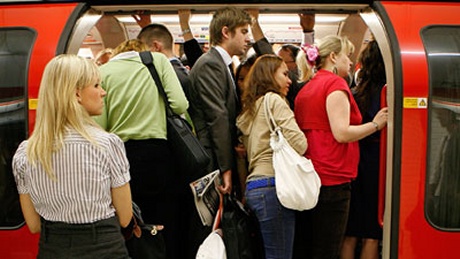 A bit like when there’s someone breathing right down your neck on a crowded train, that sent the Tories shuffling ever further along the political spectrum in an attempt to put some distance between them and their opponents, only to be confounded as Labour doggedly matched them step for step, constantly pressing their manifesto-groins into the Tories’ rear like some sort of gruesome sex pest.

The phenomenon has only become more marked since Labour lost power. Shadow Cabinet members now line up to appear on the news promising to be tougher on immigration and tougher on the poor. (So desperate, in fact, are Labour not to be seen as “soft” on welfare they’re actually to the right of UKIP on the subject.) When Johann Lamont talks of changing the devolution settlement, it’s not in terms of bringing more powers to Scotland but more “responsibilities”, echoing precisely the words of Scottish Tory leader Ruth Davidson.

(Poor old Scottish Labour still haven’t managed to work out that the strategy that served the party so well south of the border doesn’t work in Scottish Parliament elections, because something approaching a fair electoral system DOES give voters more than a choice between Tweedledum and Tweedledumber.)

At first glance this ought to seem like bad news for a party like UKIP. With the Tories pushed ever further to the right by Labour (David Cameron and George Osborne are, it’s widely agreed by both left and right in the UK press, pursuing policies even Margaret Thatcher would have shied away from), there ought to be no room for an even more right-wing Tory fringe party.

But there are two reasons it hasn’t worked out that way.

The first is simply a stroke of luck for Nigel Farage’s troops – the coalition has poisoned the Lib Dems, perhaps forever, which has liberated Labour from a threat on the left. With the Lib Dems hopelessly discredited on the left (and also electorally), Labour can worry even less about losing its core voters and keep pushing right.

But why does that suit UKIP, given that they don’t want the Tories encroaching on their ground? It works because with both major parties engaged in a consensus, the position of the “centre” changes radically.

Policies which would once have seemed extreme suddenly find themselves in the territory of respectability, because they’re only a little to the right of the party of government.

And while it seems counter-intuitive, the disintegration of the Lib Dems also frees up a “protest vote” element sickened by the two main parties, some of which will go to UKIP purely because it’s the only alternative party with what looks like any hope of getting anyone elected.

(An impression reinforced by the wildly disproportionate and friendly coverage the media, in particular the BBC, bestows on Farage, because he gives good TV. The Corporation recently awarded UKIP a “discretionary” extra party political broadcast, and this morning’s special election edition of BBC Breakfast was a quite extraordinary spectacle in which Farage was essentially allowed to interrogate the representatives of the other three parties as an interviewer.)

It might seem a stretch that Lib Dem voters would defect to UKIP, but not all Lib Dems are left-wingers. Some belong to the Nick Clegg “Orange Book” faction of the party, which is politically far closer to the Tories than the Lib Dems like to acknowledge, and some Lib Dem votes are tactical ones aimed at blocking Labour rather than the Tories, which could easily switch to UKIP for the same purpose.

For as long as Labour continue to handcuff themselves to the Tories in pursuit of Middle England votes, then, UKIP will continue to rise. And in the process, Labour will continue to dig itself deeper into a hole, pushing the terms of political discourse further and further onto the ground where it’s least comfortable and least trusted, and making it easier and easier for UKIP to dictate the agenda.

(With a side effect that Labour voters in the poorest areas, especially in the north of England, will also become easier and easier prey for super-extremists like the BNP, who capitalise on the desperation of working-class poverty with what are fairly left-wing economic policies ostensibly funded by excluding ethnic minorities from services.)

Labour seems deadlocked into this cycle of self-destruction, completely bereft of the courage to offer the electorate a genuine alternative to Conservative ideology. The unfortunate British public has only begun to suffer the consequences.

22 thoughts on “Why Labour is to Blame for UKIP”