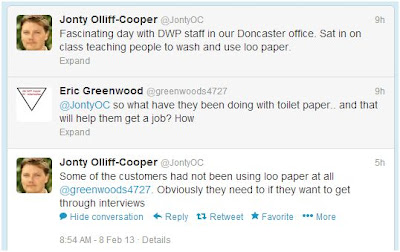 Thanks to those who pointed us to this conversation yesterday.

Incredible, isn’t it?
Let’s just think about what was going on in Doncaster.
It would be quite normal, in a group session dealing with, say, interviews, to talk about the need to be scrubbed up and well turned out.
It could well be that one or two people in such a group have obvious problems with personal hygiene.
It should then be up to the adviser to talk to those individuals privately.
Maybe they are homeless.
Maybe they have mental health issues.
But the idea that you need to teach a “class” on washing and using toilet paper is extraordinary.
I’d love to know the reactions of the vast majority of the class.
But then there’s the issue of Olliff-Cooper actually tweeting this.
What did he think he was doing?
It’s a vile insult to unemployed people forced onto the Work Programme with A4e.
It says to potential employers that  there’s no point in even looking at these primitive savages.
And that can’t do much to help A4e’s profits.
This from the man who is A4e’s director of policy and strategy!
WatchingA4e

‘Jonty began his career in the private sector as a strategy consultant at the Boston Consulting Group, specialising in retail strategy.

‘Since moving to public policy, Jonty has worked in a variety of strategy functions across Westminster and Whitehall, including at the Department for International Development, the Cabinet Office, ThinkPublic and as an adviser in the Conservative Party Policy Unit, where he led on technology, innovation and public service reform issues.

‘Prior to joining A4e, Jonty was head of the Progressive Conservatism Project at the think-tank Demos.

‘Outside A4e, Jonty is an executive member of the Bright Blue political network and an associate at Demos, and sits on the steering group of the Big Society Network.’