Evictions due to under occupation deductions

Calling on the Scottish Parliament to urge the Scottish Government to amend Section
16 of the Housing (Scotland) Act 2001 to prevent social landlords from using rent
arrears caused by under occupation housing benefit deductions in eviction actions, and instead requiring such under occupation arrears to be pursued as an ordinary debt.

Action taken to resolve issues of concern before submitting the petition

This issue has been raised and discussed in local public meetings in Glasgow, and we
have provided a full briefing paper on the proposal to Humza Yousaf MSP, Scottish
Government Minister, who has passed same to the Housing Minister. The briefing
paper was also forwarded to Johann Lamont MSP. Both Humza Yousaf and Johann
Lamont were present at a public meeting of concerned tenants in Govan last month
where the proposal was supported by 100 local tenants. Both Shelter Scotland, the
STUC and the Glasgow Advice Agency support the proposal in this petition. We await
the response from the Housing Minister, and Johann Lamont MSP.

Govan Law Centre defends a high volume of eviction actions in Glasgow, and
specialises in the prevention of homelessness across the West of Scotland. We and are our partner agency, the Glasgow Advice Agency, which provides advice services across two-thirds of Glasgow City, have already had many tenants contact us concerned that they will be unable to pay the shortfall in their rents due to under occupancy deductions from April 2013. We, along with other civic and local bodies, have no doubt that unless measures are taken to mitigate the effects of the under occupancy deductions, Scotland will see a significant increase in eviction actions, which may be extremely hard to defend given current housing law.

Housing benefit under-occupancy provisions for tenants in the social rented sector are introduced by section 69 of the Welfare Reform Act 2012 and the (draft) Housing
Benefit (Amendment) Regulations 2012, with effect from April 2013.  These provisions
will see tenants of councils and RSLs in Scotland lose on average £12 per week, with
some tenants losing as much as £22 per week in housing benefit. There is widespread concern in Scotland that these changes will cause major detriment to thousands of households in Scotland.

The DWP estimate 660,000 claimants will be affected across the UK, and the Chartered Institute of Housing in Scotland suggest as many as 95,000 tenants could be affected in Scotland:

When it comes to Scottish rent arrears eviction actions in sheriff courts, often the
success or failure of a tenant in preventing eviction will turn on a few pounds per week, for example the standard payment for arrears direct is £3.55 per week. Accordingly, the prospect of £12 to £22 per week being deducted from rent payments under the bedroom tax from next April means Scotland’s law centres and advice sector will be unable to defend many eviction cases in practice.

We are suggesting a minor amendment to section 16 of the Housing (Scotland) Act
2001 (as follows) which would prevent ‘bedroom tax rent arrears’ being used to
establish or justify a crave for eviction, and instead the landlord could obtain a payment decree for these ‘type of arrears’, and pursue them an ordinary debt.  A proposed illustative amendment is as follows:

(a) In subsection (2) after “Subject to subsection (1)” insert <and (7)>
(b) After subjection (6) insert – “(7) For the purpose of subjection (2), the court must disregard any rent lawfully due from the tenant which has been accrued due to a shortfall in housing benefit in consequence of regulation B13 (Determination of a maximum rent (social sector) of the Housing Benefit Regulations 2006 (2006/213). (c) In paragraph 1 of Part 1 of schedule 2 before “rent lawfully due” insert, <Subject to section 16(7),”

relied upon to establish grounds for eviction, or to make out a case of why it was reasonable to evict. Eviction based purely on bedroom tax arrears would be incompetent.

The policy rationale for this approach can be summarized briefly as follows:

• Arrears accrued by tenants due to the ‘bedroom tax’ from April 2013 are not the ‘fault’ of social rented sector tenants, and therefore using such arrears to establish or make out a case for eviction must be unfair and unreasonable as matter of principle and social policy.

• The DWP’s Impact Assessment accepts there are insufficient smaller properties for
tenants to downsize to, and therefore many tenants will have no realistic alternatives other than to accrue rent arrears from the bedroom tax.

• The public cost to accommodate a family made homelessness is on average £24,000 per case , which would place major pressure on local authorities and the NHS in Scotland in a time of budget cuts, and therefore the need to prevent eviction from the bedroom tax is in the wider public interest.

• Given the imminent nature of the cuts, and the lack of practical solutions available to tenants, there is a cogent case for providing social tenants with a longer transitional period, and a guarantee that they will not be evicted due to these reforms in the short to medium term.

• Ultimately, many social landlords in Scotland are already taking proactive action to
mitigate against these forthcoming housing benefit cuts, and have no desire to evict
tenants because of the cuts. However, RSLs and councils are subject to public audit
and have a duty to pursue rent arrears as a matter of law, and in terms of their
regulatory supervision. Accordingly, this amendment would assist social landlords, by
ensuring they could only pursue bedroom tax arrears by way of ordinary debt recovery (payment actions, followed by ordinary diligence).

Do you wish your petition to be hosted on the Parliament’s website to collect
signatures online?

Besides the poll tax, the last time Scotland saw such a regressive housing tax on the
low paid and poor, was back in 1748 when you were taxed on the number of windows your house had. The phrase ‘day-light robbery’ was coined, and people bricked up their windows to escape it.

Sadly, escaping the regressive bedroom tax won’t be so easy. Where will people in homes with an ‘extra room’ go when there is insufficient capacity in the social rented sector?

How will people and families cope with being evicted as they will be unable to pay
their rent due to the bedroom tax?

Scottish Parliament Petitions: Evictions due to under occupation deductions 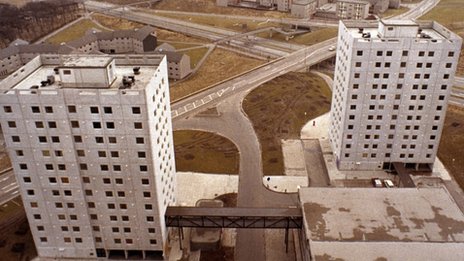 Much social housing, like these 1970s flats in Cumbernauld, was build for larger households

The Scottish parliament has been asked to change the law to prevent tenants being evicted because of changes to housing benefit.

Mike Dailly of the Govan Law Centre said that people could be homeless because of the UK government reforms.

He said Holyrood should act to minimise the consequences of the change.

But, speaking on Sunday Politics Scotland, SNP MSP Linda Fabiani claimed little could be done until the Scottish parliament has more powers.

The changes to housing benefit are intended to encourage mobility by discouraging tenants from staying in homes deemed too large for their needs.

“This is the new poll tax in Scotland. It’s a vicious attack on the low paid and poor.

“The Scottish government can do a lot to prevent people from being evicted.”

The law on benefits is a reserved matter, controlled by the UK parliament at Westminster, but Mr Dailly said Holyrood could change the law in areas that it does control.

“What we are calling on is for the Scottish government to change housing law so that if you incur ‘bedroom tax’ arrears that should be treated as an ordinary debt but not allow you to be evicted,”

“I’m actually not convinced by this proposal because I don’t think it’ll particularly help the people who have the problem,”

“I also think it makes it very difficult for social landlords who have to pass on that cost to the remaining tenants.

“For me, the answer is that this (change to housing benefit) should not be happening.”

“No change is not an option,”

“We’ve got a combination of a housing crisis, with about 187,000 people on waiting lists, and a financial crisis.”

BTC Comment: THIS IS NOT THE END OF THE MATTER!