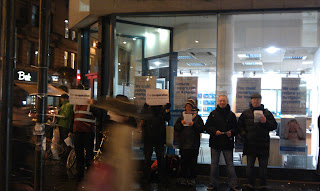 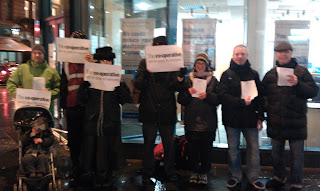 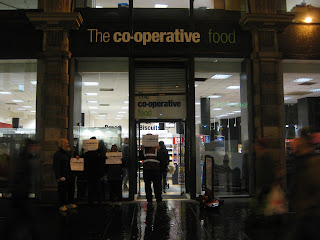 Anti-Co-Op/Atos Contract picket outside the Co-Op Bank and the end of the picket at the Co-Op supermarket. The placards say, ‘The Co-operative not-so-good for everyone’.
On Thursday 22nd a dozen people, including members of benefit claimants’ groups Black Triangle and the Crutch Collective, Clydeside Industrial Workers Of The World, Glasgow Anarchist Federation, Glasgow Solidarity Federation as well as other individuals took part in the hour long picket of the Co-Op Bank and supermarket on the same street in central Glasgow.
We gave out leaflets to Co-Op customers and the hundreds of people going pass on their way home from work.
The leaflet highlighted the Co-Op’s four year occupational health contract with Atos. Atos continue to make huge profits by continuing to assess most sick and disabled benefit claimants as fit for work, ignoring contrary medical evidence, to comply with Government targets for benefit cuts.
The cuts are being imposed to make the poor pay again for the latest crisis in capitalism caused by the rich. We asked people to contact the Co-Op to tell the company, that sells itself as ethical, that they will be losing their custom until they cancel their contract with Atos.
Most interest came from older women who perhaps know from experience what the Co-Op is really about. Maybe they know the reality of the Co-Op’s claim that they have always been ethical, because they have always provided affordable prices to those in need.
In past generations the Co-Op mostly employed women. Their exploitative employment practices are still the same as any other business.
Historically the Co-Op has played a significant role in the daily lives of many working class people. But it’s contribution to working class emancipation has been marginal at best and at worst has added to illusion that such an aim can be achieved within the capitalist system.
Like any other business it is open to the pressures that come with the fluctuations of the marketplace and has made workers redundant when the markets are down.
Like any other bosses the Co-Op management have made older workers redundant, using the excuse that they would be incapable of coping with the introduction of new technology, that was never introduced, because managers had nothing better to do than manage workers like cogs in a machine.
Co-Op management tried to placate us with more empty words about ethics, rather than taking action against Atos.
They have refused to rule out Atos from the bidding process for their new occupational contract, that starts next year, despite the unethical behaviour of Atos being well documented.
If the Co-Op were interested in ethics they would have already publicly rejected an Atos bid.
Their decision on who to award the new contract to will be based primarily on cheapness even though the profitable Co-Op do not have to do this out of economic necessity.
Atos and the police have been monitoring anti-Atos activity to try to manage dissent towards ineffectiveness.
Now the Co-Op are up to it as well to help their Atos partners.
The communications from Co-Op management, the hiring of extra security staff and the ludicrous number of police present for the picket show that the Co-Op are extremely worried about their ethical image, no matter how fake, even from the dent that can be caused to it by a relatively small group and one action.
We must be doing something right.
Just imagine what actions against the Atos contract by larger groups in more that one place could do.
Claimants Resisting Unfair Treatment Cuts and Harassment
The Crutch Collective