A father was disgusted after his severely disabled son might have to prove he couldn’t work in order to receive benefits.

Liam Barker, 18, was not expected to live beyond three months old after he was born paralysed and has remained on life support since birth.

But Liam defied his prognosis and celebrated his milestone birthday in December last year despite being born with an incredibly rare condition, called myotubular myopathy, a terminal muscle wasting disease.

He requires a ventilator to breathe and needs constant care from his parents Phil Barker, 52, and Michelle, 44, at their home in Linthorpe, Middlesbrough.

The family were awaiting news on which benefits their son would be entitled to but were shocked when they received a letter which informed them Liam would be entitled to employment and support allowance but that he may need to attend a ‘Work Focus interview’ in order to receive them.

Two weeks ago, Mrs Barker, who also has a 12-year-old daughter, discovered that Liam’s child benefit payments had been stopped.

Mr Barker said: ‘I discovered the letter last week. We’d been on a week’s respite and it was there when we got back.

‘I rang Stockton Benefit Centre and a woman on the phone asked me: “Can he work?”

‘I tried to explain his medical condition and she just said: “It’s a yes or no answer, it’s a standard issue form.”

Mr Barker explained that his son couldn’t work but the lady on the phone said he may have to be interviewed and receive a medical assessment. 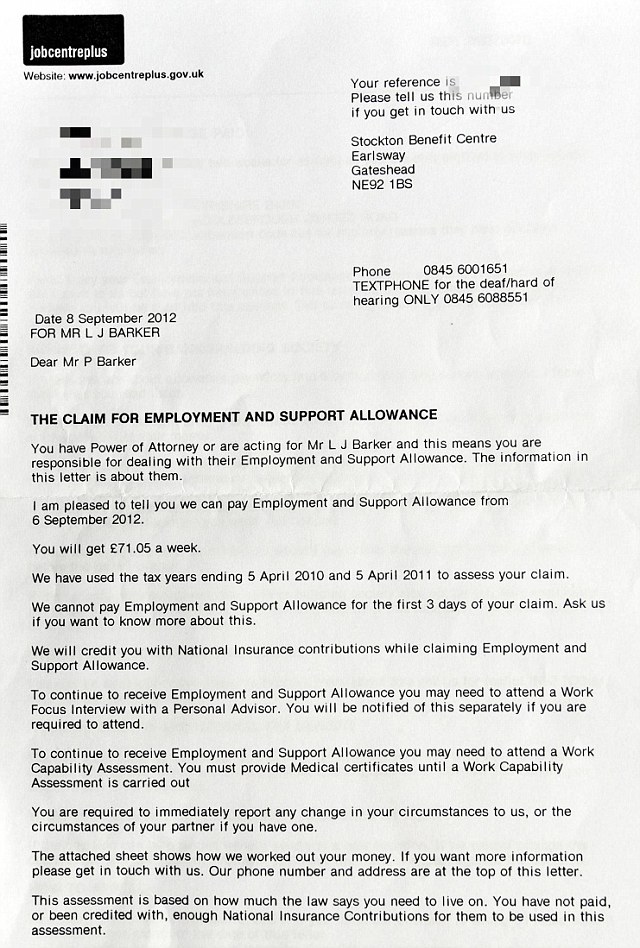 The father explained there was no way his son could attend an interview as the only place he visits is the hospital.

The family are still waiting to be instructed on what they are supposed to do now.

The father believes that Job Centre Plus should know Liam’s situation as they have his National Insurance number, which can be used to reveal he claims disability benefits.

‘I was quite annoyed really at that,’ he said. ‘After 18-years surely they must know now.

‘How is he going to go to a back to work interview? He cannot answer them. He can only communicate with a blink so I do not know what they are going to expect him to do.

‘If another disabled person had these issues and didn’t have a full time carer, they might lose their benefits or not know what to do. It’s caused a lot of upset.

‘I don’t think they really understand the situation and if they’d just looked into his National Insurance number or looked into his records properly they would realise he can’t work.’

The Department of Work and Pensions says candidates found to be incapable of work, receive long term support.

A spokesperson for the DWP said: ‘Often as a child gets older their needs change over time.

‘The Work Capability Assessment looks at what a person can do, not only on what they cannot.

‘If someone is not capable of any work, then they will of course get long term
incapacity support through the benefits system.’