This report by STV News includes a statement that DLA Overpayments amount to more than £600 million.
http://news.stv.tv/scotland/190764-blind-man-tells-msps-benefits-system-left-him-feeling-like-a-criminal/
It’s a lie.
https://blacktrianglecampaign.org/2012/06/14/how-the-public-massively-overestimates-benefit-fraud/

‘Let us first deal with the “Big Lie” contained in the interview. Iain Duncan Smith believes that the current system of DLA application conceals “massive fraud”. What evidence does Iain Duncan Smith base this assertion on other than his evident prejudice against disabled people. His own Department (the DWP) estimates that fraud accounts for only 0.5% of DLA claims. Since when did 1 in 200 become “massive”? In fact DLA is one of the benefits with the lowest levels of fraud.’

https://blacktrianglecampaign.org/2012/05/16/urgent-callout-for-letter-signatories-iain-duncan-smiths-dla-claims-dpos-letter-to-the-daily-telegraph/#comment-7962
The Committee should summon the DWP to explain this blatantly misleading statement.
They should not be allowed to get away with deceiving Scotland’s people in this manner.
We must insist upon truth and accuracy in public debate and in our dealings with this rogue department of the State.
We’d appreciate an acknowledgment of this submission.
Yours sincerely,
John McArdle
on behalf of
Black Triangle Campaign
https://blacktrianglecampaign.org

Please also note in response to the claim at 1 minute 22 seconds into the STV report:

70 per cent of claims for life?

A DWP analysis from last year confirms that 71 per cent of all those receiving DLA do so on an indefinite basis. However this does not necessarily mean that they are no longer in contact with DWP. As the DirectGov website states:

“If your benefit award is for an indefinite period, you will not usually have to make a renewal claim. Indefinite awards can sometimes be reviewed and you may need to have another medical examination as part of the review.”

Whether or not this happens in practice is uncertain, as another DWP report from 2009 observes that “assessments of ongoing claims – in essence, ‘spot checks’ on continuing eligibility – appear to occur infrequently if at all.”

It’s also important to note that we can only say that 71 per cent of the total caseload of claimants are in receipt of indefinite awards, and this does not mean that a similar proportion of new claims are given indefinite awards.

In fact, acording to the DWP’s own research less than a quarter of new claimants receive indefinite awards, with the remainder being given the benefit for a fixed period. 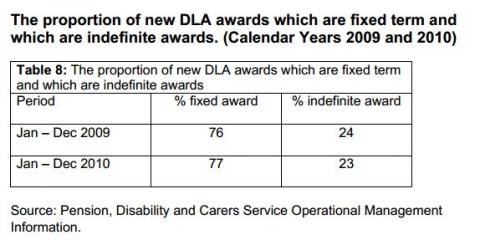 The difference between the two figures can be explained by the fact that, while there is a high turnover in the fixed term claimants, people understandably move on and off indefinite awards at a much slower rate.

Iain Duncan Smith can point to evidence to support both of the claims he makes about the current operation of the Disability Living Allowance, however the significance of each is hotly contested.

While there has been a 30 per cent growth in the raw number of claimants, this is significantly lower once demographic changes are accounted for, and the discrepancies in the relative growth rates of various conditions suggest the link to wider societal trends might be more complex than the Secretary of State acknowledges.

Similarly, while it is true that over 70 per cent of DLA claimants are on indefinite awards, it isn’t necessarily true that these people are ‘never looked at again’.