This attack shall not go unchallenged

A group of us should march on Channel 4 and send a delegation in to protest to the Chairman of Channel 4 ~ Please contact us if you wish to join with us.

It is this kind of constant drivel which sensationalises benefit fraud – which is by the way running at 1% of the entire social security budget, much of which is accounted for by official error in the system – plus the astronomical costs of paying AtoS and the ‘Welfare-to-Work’ poverty pimps and social parasites hundreds upon hundreds of millions of pounds to carry out the systematics robbery and oppression of disabled and unemployed workers.

Nah! It wos the benefit scroungers wot dunnit! Bingo! Keep believing that Pal, until they come for you. And it won’t be long.

A group of us are marching on London from Scotland Again at the end of the month to join our DPAC comrades for the week of Disabled Activists’ Paralympic Passion against AtoS.

Black Triangle will be holding a ceremony of remembrance for all those who have precipitously died having been assessed as ‘fit fro work’. They now number in the thousands.

We will also remember the living who are living under the jackboot of ConDem oppression and pray for their catastrophic end to come speedily, and in the space of six months from the day of the TUC Demonstration on 20th October.

In our view, this demonstration must be followed by mass co-ordinated general strikes. It will also be necessary to organise economic boycotts and blockades, walkouts and civil disobedience.

As regards workers at the DWP – they should join us and DPAC at our demonstrations during the Paralympics in solidarity. They should also make a statement position declaring that workers are not required to participate in policies and systems which have demonstrably and irrefutably been shown to be harmful to sick and/or disabled people, many of whom are sadly no longer with us as a direct result, and this has been confirmed in many cases by H.M. Coroner.

What more evidence do all the members of PCS need to show good cause for a demonstration or a strike in defence of human rights and us who are under attack.

We call upon all grassroots members of PCS to now mobilise their members for Our AtoS Games protests.

We send our comradely greetings and genuinely heartfelt expression of full solidarity to our striking PCS brothers and sisters and to sisters and brothers in GMB and Unite at Remploy in Birkenhead also striking tomorrow.

The time and location of the remembrance ceremony in Central London at the time of the opening of the London 2012 Paralympics will be announced shortly.

UNITE IN RESISTANCE ACROSS CIVIL SOCIETY WITH THE TRADES & PROFESSIONS!

UNITY IS OUR STRENGTH; SOLIDARITY AND PEACEFUL DIRECT ACTION OUR WEAPONS!

In Defence of Disability Rights

Benefit cheats’ bonanza: Jobcentre Plus staff pay out even though claimants’ documents are just shopping lists and letters saying ‘don’t give me a job’

The Government’s failure to crack down on Britain’s benefits cheats has been exposed in a damning TV documentary.

The programme shows one young man filling in his Jobseeker’s claim form by copying down his weekly shopping list. Another submits a CV and  application letter as evidence that he was trying to seek work, yet both clearly state he does not want a job.

In both cases, the claims were passed. 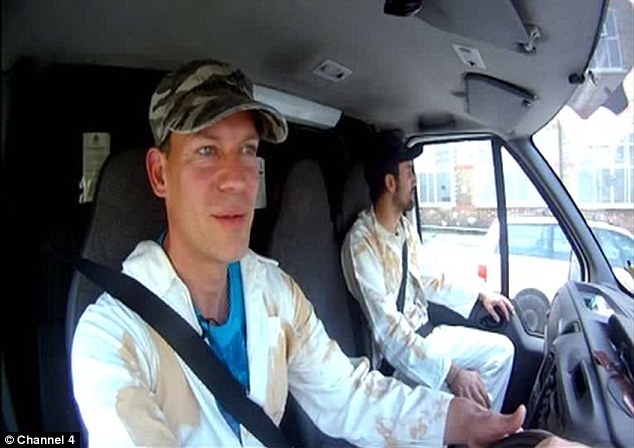 Working the system: C4’s undercover reporter Morland Sanders, pictured driving with Alay Paun, said it was ‘all too easy’ to cheat the benefits system

Joe Paxton, 25, uses a hidden camera to show a Jobcentre Plus adviser in Shropshire rubber-stamping his claim for Jobseeker’s Allowance (JSA), having failed to spot that it was a simply a list of food items. Claimants over 25 can receive up to £71.

Mr Paxton, who was working undercover with television reporter Morland Sanders, said: ‘I’m supposed to write a list of  14 things I’ve done each week  to find work but no one ever  bothers to check it, so it was no surprise when I submitted my shopping list instead and they didn’t even notice.’

He graduated in 2009 from Aberystwyth University, where he read genetics, but has been signing on ever since. He says he is becoming increasingly disillusioned with the system.

‘We do all that is asked of us but what is the point if they are just going to ignore it?’ says Mr Paxton. ‘This shows just how easy it is to stay on benefits if you want to and begs the question how seriously staff actually take their role in finding people like me work.’

In order to obtain JSA, claimants must enter into an agreement with an employment officer to highlight the attempts they have made to find work each week. The terms can vary from centre to centre.

But the system’s potential for farce is further highlighted by 30-year-old unemployed events manager Alay Paun. Under the terms of his agreement, he has to apply for three jobs each week and then show his adviser, via his mobile phone, copies of what he sent.

However, working with Sanders, he altered the copies to say he didn’t want the job because he preferred to stay on benefits and changed the last line of his CV so it read:  ‘Please don’t give me the job, I don’t want it.’ Yet the adviser at his Jobcentre in Dalston,  North-East London, didn’t spot the glaring anomalies. 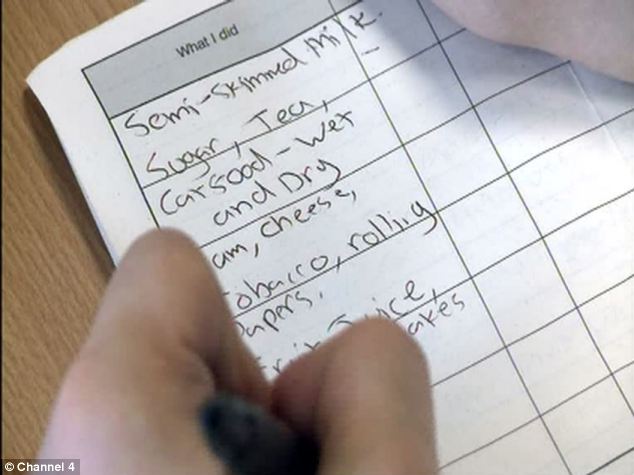 ‘Farce’: The programme shows Joe Paxton writing a shopping list out on his claim form for Jobseeker’s Allowance – the claim was passed

‘She scrolled through my emails on my mobile and my claim was passed for another week, within five minutes of me walking in,’ says the Sussex University graduate, who had been out of work  for five months when the film was made.

In April this year, Deputy Prime Minister Nick Clegg praised  Jobcentres, claiming that they offered the unemployed the chance to either ‘earn or learn’. But with more than 2½ million unemployed in Britain and a further 500,000 school and university leavers about to flood the job market, the documentary casts serious doubt on their effectiveness.

The cost of people working cash-in-hand while still fraudulently claiming benefits runs to more than £226 million a year and Jobcentre Plus staff are seen as the first line of defence.  Yet when Mr Paun goes into the Jobcentre to sign on wearing paint-splattered overalls and looking like a professional decorator, his adviser readily accepts that he’s painting his bedroom. 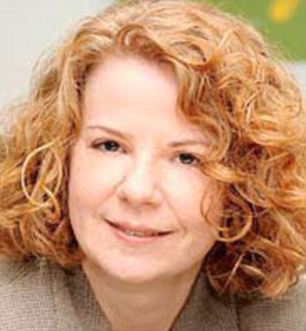 ‘Satisfied’: Ruth Owen, the chief operating officer of Jobcentre Plus, said she was satisfied staff were doing enough to get people into work

Martin Archer, who worked as a Jobcentre Plus adviser until last year, admits: ‘Filling out a fraud referral form can take time, so unless you’ve got a very supportive manager and unless you’ve not got a busy diary, you’re going to be tempted to just let it go under the carpet. When I was there, not enough fraud referrals were being done.’

Mr Archer adds that if he were out of work and keen to find a job, he wouldn’t start at the Jobcentre. He said claimants were often penalised for using their initiative, meaning many of those who had, for instance, secured unpaid work experience would have their benefits stopped.

‘There is no guidance on this. You do get to this ludicrous situation where somebody has found themselves a great opportunity, and the Jobcentre just doesn’t know how to process it. Most of my colleagues would err on the side of caution and they would classify internships as work.

Ruth Owen, chief operating officer for Jobcentre Plus, claims there is plenty of help available for Britain’s unemployed but admits: ‘I am disappointed we haven’t picked up the silly mistakes that Joe and Alay highlighted. But I am satisfied that Jobcentre Plus is getting people into work and ensuring they meet their responsibilities.’

She appears baffled when asked why 127 jobs based in Jobcentre Plus itself are advertised on  neither the centres’ terminals nor their own website. She later said that Jobcentre staff knew about them and could pass the information on to claimants.

But says Channel 4 Dispatches reporter Sanders: ‘Jobcentre Plus seems ill-equipped to do what it was set up for, which is to find people jobs.

‘From our discussions with Joe, Alay and many other job-seekers, if you want to, it is still all too easy to cheat the system.’