So the Queen’s Diamond Jubilee has passed into history. The bunting has been packed away as the dazed and dimple-cheeked flag-waving masses have returned to work and the country’s coffers are almost 300million lighter as a consequence of the celebrations.

And, yes, that’s the type of troopers we are in this nation.  So robust in our devotion to Queen and country, that even when we are already enduring daily savage cuts of austerity we can still find the money to toast one of the world’s richest women in her job-for-life and with-no-other-candidates-to-compete-for-it role.

Aww, bless us. It’s this type of unyielding devotion to privilege that reminds me that England has lost none of its cap-doffing heritage despite fears that immigration will water down our culture and give us a backbone.

So, back to the Queen’s Jubilee – and the cost of it. Well, it turns out that not everyone got a slice of the money pie that was dolled out on that day. The trickle-down effect did not happen, as it were. 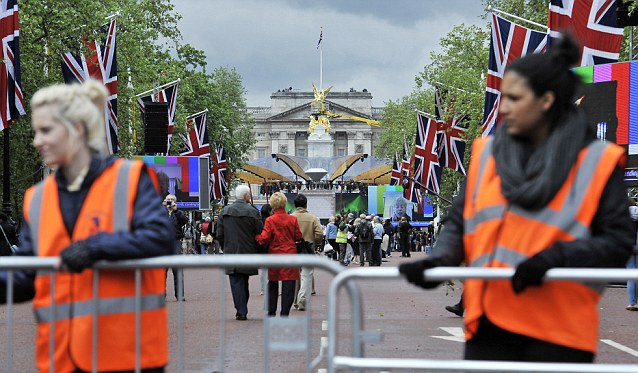 Misused? Despite wide agreement on the failure of the scheme spokespeople attempt to emphasise the apparent benefits of unpaid involvement

In fact, so we have learned, some 80 stewards and security personnel at the Jubilee Flotilla and concert were, in fact, paid nothing. That’s right, a big fat zero (and with no noughts on the end) to work 16-hour shifts – including protecting the Queen – from early in the morning until late in the evening.

Worse, it has evolved that many of these workers were transported, via coach, from Bristol to London – about 150 miles each way – and were dropped off in the Capital in the early hours of the morning, forced to sleep rough under London Bridge and then left to prepare for their duties by having to get ready in the open and damp air.

Even for the most over-zealous supporter of this Coalition’s schemes, something sounds slightly skewed there, surely? Of course it does.

Only the most seriously indoctrinated would conclude that this is an acceptable manner in which to treat workers in 2012. 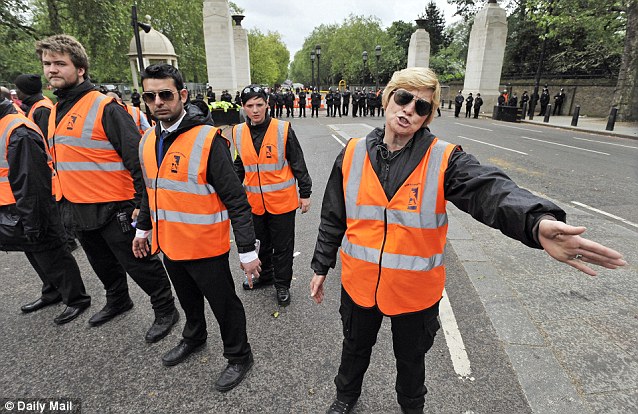 Some 80 stewards and security personnel at the Jubilee Flotilla and concert were, in fact, paid nothing

But before we get into how truly horrendous this was, let us look – for the sake of argument – at the two very different schools of thought when it comes to unpaid work experience.

There is the ideology that views work experience as a necessary step to gainful employment and every one of us, yes including us journalists, have to do it at some time or other.

I agree. There is much to be learned from hands-on experience. In some respects you can’t beat it. No amount of ‘ologies’ (as Maureen Lipman used to say in the BT ads) can replace good old-fashioned nose-to-the-grindstone experience. I have engaged in plenty of it and know the value to be gained.

However, there is a world of difference between experience and exploitation and there is no doubt – no, none whatsoever and despite the Coalition spin this morning that the stewards are just tickedy-boo happy – that working at the Queen’s Jubilee fell into the latter category.

It was a catastrophic failure. Even the company involved with the organisation, Close Protection UK working in co-operation with the charity Tomorrow’s People, have been forced to concede this was so.

Yes, their spokespeople may attempt to emphasise the apparent benefits of unpaid involvement but that doesn’t negate the fact that they are having to back-track quick-time over the exposure of their ghastly and painful farce.

They like to tell us that these unrewarded workers were on a ‘guinea pig run’ to see if they were fit for paid stewarding duties at The 2012 London Olympics, but even that doesn’t sound right.

So, let me get this clear, they are saying that the safety of the Queen, and the million or so citizens who turned out to admire her, were of low priority in the grand scheme of things?

That a ‘once in a lifetime event’, such as the Diamond Jubilee, could afford to carry inexperienced go-fers whereas the Olympics cannot?

That hardly suggests that we cherish the safety of our Monarch, does it?

And, with respect, since when does a job like stewarding require a work-experience of stewarding to learn how to be a steward?

Students have been paying their way through college for years by stocking stadiums for big games and concerts in such roles.

The excuses and justifications we have heard are nonsense. Some jobs do not require work experience to fill them, they simply require to be filled. And make sure to be rewarded with a decent wage, while they are about it.

The truth is that the Government’s flagship ‘Workfare’ scheme (which has been operating for years under successive governments and with less emphasis, previously, on the mandatory element) is an almost total failure.

There is no data to suggest it would be a success. An extensive Government report into similar schemes in the USA, Canada and Australia concluded that it was an ineffective means of getting people into employment and should not be replicated in the UK.

David Cameron knows this. As does the Employment Minister Chris Grayling and yet they continue to trumpet their Workfare scheme as a legitimate means to return the country to work. 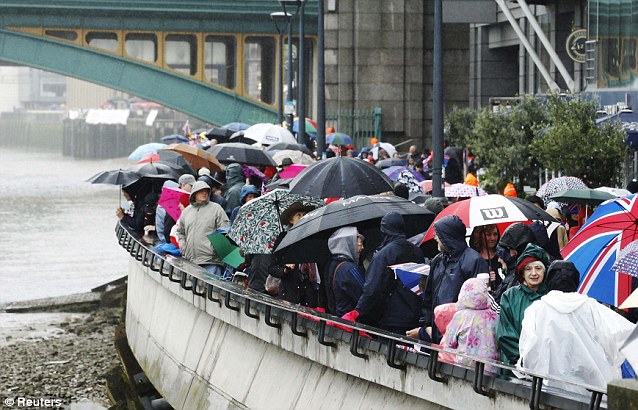 The damp conditions during the Diamond Jubilee celebrations made it difficult for volunteers, some of whom were allegedly left in tears over their conditions

Who do they think they are fooling? The led-masses, presumably, who have been whipped into an hysteria about ‘benefit spongers’ and ‘scroungers’ by the hateful spin emanating from Downing Street.

There are numerous liabilities and dangers attached to free labour, although I doubt the Department for Work and Pensions are likely to release such details in a press release.

These include, but are not limited to, the fact that while the person is engaged in unpaid employment their time could more productively be spent seeking paid employment – although with almost three million unemployed one wonders where these jobs are – or even used for creating an enterprise of their own.

Necessity, we are always told, is the Mother of Invention so why not invest in the creation of entrepreneurs rather than unpaid skivvies? 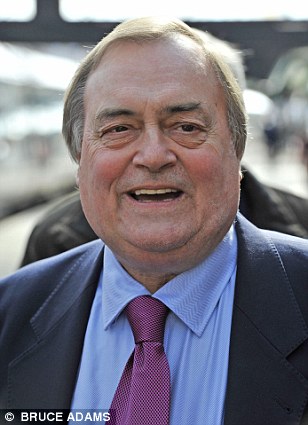 Lord Prescott demanded an investigation into the claims the workers were poorly treated, yet only ‘two or three’ have complained after the event

What really winds my handle is the fact that so many charities are actively engaged in taking advantage of the free labour available to them.

These include, but not solely, Age UK, Cancer Research, the British Heart Foundation and Barnados – although they have all remained deafeningly silent on the subject.

Many charity shop workers are unpaid and they are expected to work full-time. It’s not a case of an hour here or there but, for some, a 37-hour week. Shame on these charity Chief Executives – the average salary of the role in the top 100 charities being £166,000 – for opportunistically taking advantage.

They have condoned a scheme that allows workers on the ground to be paid a pittance – in the form of their Job Seekers Allowance, average amount £75 per week – and in return give them no perks, little satisfaction or job security

It’s a modern day scandal – talk about ‘charity begins at home’ – but because numerous so-named charitable companies benefit, it is one that is largely unreported.

The other simple fact about getting people to work for their benefits, and therefore far and away below the national minimum wage, is that it does not generate goodwill in the workplace.

Despite reports claiming that the unpaid stewards were having ‘a jolly time’ working for nothing, the reality is quite, quite different.

The level of upset and resentment of people who were forced to camp out on one of the coldest and wettest nights of the year so far, can be clearly seen in this remark posted on social network sites. It is anonymous because the mother concerned fears her child’s benefits will be removed for daring to speak out.

“My child is part of this farce up there but is so desperate for a job they have stuck it out. They have been on the phone in tears, saying they are soaking wet, bleeding feet and sleeping in a wet muddy field with barely any facilities. I have said for God’s sake come home…but if they did it would be the end of the course and no SIA badge.”

Imagine if it were your child in that position where they were forced into such inhumane conditions or they would be penalised, either by stopping Job Seeker benefits or failing them from gaining a certificate they have been told they need in order to pass along to the next level of ‘almost employment’.

That sounds like a racket to me and, were it my child involved, I imagine I would be slightly less celebratory about the Queen’s Diamond Jubilee than I already was.

And therein lies the massive elephant in the room about Workfare and how this Coalition is choosing to use it.

It is creating an unpaid workforce that is exploitative rather than worthy.

It allows for the profitable boosting of substantial private industry companies who use Workfare employees, including Argos, TKMaxx, Miss Selfridge, Poundland, Pizza Hut.

The list of those lapping up free workers runs into the hundreds. It is shameful and as clear an indictment of this Coalition’s intentions towards the people as we should ever need to make us wake up.

Under David Cameron, the poor will continue to get poorer and be more exploited for the benefit of capitalism and consumerism and the rich will get richer and live high on the hog of their own greedy creation.

Come on, let’s stop it now. Yes, we want a nation that is proud to work and contribute to our economy, no we do not want a scenario that takes us back to the days of the Victorian workhouse.

What a terrible legacy of this Coalition. The worst working conditions in hundreds of years and a labour force that has revealed itself to be rather more slave than productive.

We have heard so much about being proud to be British this week. Sadly, exploiting desperate people at the Queen’s Diamond Jubilee is not one of them.