“Yet for your sake we are killed all the day long; we are regarded as sheep to be slaughtered” (Ps. 44:22)

Self advocates across the UK have been left saddened and stunned by the untimely loss of Peter Lewis, disability campaigner and founder member of Cardiff People First, in the early hours of Saturday 28th April.

Peter’s strength of character and positive personality will be remembered by everyone who had the pleasure of meeting him.

Cardiff People First has made the following statement about Peter, their friend and colleague:

“Peter Lewis was a much loved member and Trustee of Cardiff People First. He was a founding member and with us for 20 years.

He was passionate about disability rights and campaigning for equality and justice. He was a great public speaker, an ambassador. He was very well organised and took his role seriously.

He was well known across Wales for his motto: ‘Disability is not inability’. Something we believe in strongly at Cardiff People First.

He had a brilliant mind, and was well known for his jokes. He had a great sense of humour and loved making people smile. A true performer.

Peter was kind, warm, and reflective, a charming man, with a twinkle in his eye. He was a larger than life, unique, and positive personality. He was proud of his independence. He loved life and he loved people.

He is, was, and will always be an inspiration to us all.

He touched so many lives and we will all deeply miss him.

Peter used to say to us: ‘Never look at the negative because you never see the whole picture. Always look at the positive.’ Something we need today more than ever.” 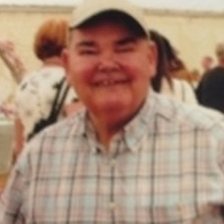 The family of a pensioner with learning difficulties murdered at his home in Cardiff have paid tribute to him as someone with a “brilliant brain”.

Peter Lewis, 68, died after being stabbed in a communal hallway outside his flat in Claude Road, Roath.

His sister Anne Wood and brother Michael Lewis said he did not regard disability as “inability”.

Detectives want to trace a man seen running near the scene of the crime in the early hours of Saturday.

In a tribute released by South Wales Police, his siblings said: “Peter was born in a time when special needs were not addressed in the respectful way that we are now used to.

“He had a brilliant brain and an excellent memory, and went to school in Gabalfa, then Pengam in Cardiff.

“The little talent that Peter had, he used it to the limit; far more than an able bodied person would with all of their talent. Peter always used to say that disability is not inability.

“Peter was known and will always be remembered for his Christian walk with God, after joining the Boys Brigade and becoming a Christian.

“Even though Peter’s life was so full of pain and suffering, he always kept a smile on his face and made everyone around him smile too”

Anne Wood and Michael LewisSister and brother of Peter Lewis

“Peter has always looked forward to eternal life, and described what he practised, not as religion, but as a relationship with God.

“Peter was snatched from us so prematurely, but we know he is happy in heaven now.

“Even though Peter’s life was so full of pain and suffering, he always kept a smile on his face and made everyone around him smile too.

“There will be hundreds of people mourning Peter; he was such a special man. He was loved and will be sorely missed.”

Mr Lewis died in hospital from a single stab wound following an incident in the communal hallway of a terraced house which had been converted into flats.

Detectives are trying to trace a man who was seen in nearby Oakfield Street at about the time of the incident at 02:40 BST on Saturday.

He is described as white, wearing a light-coloured hooded top and trainers, and was running towards Newport Road. 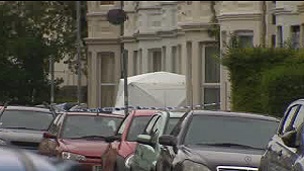 Police cordoned off the flat in Roath following the fatal stabbing

Police are also appealing for information from anyone who saw or heard anything suspicious in Claude Road and Oakfield Street areas on Saturday morning between 01:00 and 03:00 BST.

Ch Supt Alun Thomas, South Wales Police divisional commander for Cardiff, said: “Our thoughts remain with Mr Lewis’ family who continue to have our full support during this terrible time.

“I wish to reassure the people of Cardiff, and in particular Roath, that everything is being done to arrest the person responsible.”

A 31-year-old man has appeared in court charged with murdering a Cardiff pensioner with learning difficulties.

Police have said Mr Lewis was found with stab wounds in a communal hallway of his flat at Claude Road, Roath, in the early hours of Saturday morning.

Mr Jones, of Gold Street, Adamsdown, is due to appear at Cardiff Crown Court on 8 May.

He spoke only to confirm his name, age and address, before being remanded into custody.