As three people are jailed for life for the “vile” murder of a disabled woman a report suggests there are many similar cases against people with disabilities that are never reported:

As three people are jailed for life for the “vile” murder of a disabled woman a report suggests there are many similar cases against people with disabilities that are never reported.

The judge in the case said it was a “chronicle of heartlessness”.

The victim, 27-year-old Gemma Hayter, was murdered last year after being tortured. She was disabled and had learning difficulties.

The group had forced her to drink urine, hit her with a mop and beat her in her flat, before taking her to a disused railway line in Rugby where she was stripped, beaten, and had a plastic bag placed over her head.

Two other people were sentenced for manslaughter – Jessica Lynas, 19, who was jailed for 13 years, and Duncan Edwards, 20, who was sentenced to 15 years. 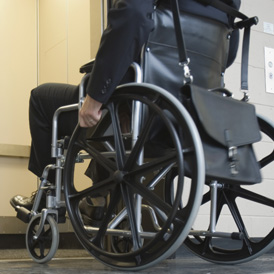 Lady Justice Rafferty, at the Old Bailey, said: “It is difficult to find the words to express how vile your behaviour was in August 2010.”

While the case above is particularly shocking, a report also out today suggests that the abuse of disabled people is more common than previously thought.

A report from the Equalities and Human Rights Commission (EHRC), which makes a series of recommendations, has found that for manydisabled people, harassment is a commonplace experience and they often do not report the abuse.

This may be because they are unclear who to report it to; they may fear the consequences of reporting it; or they may fear that the police or other authorities simply do not believe them.

In fact, the year-long investigation found that there is a “systemic failure” by public authorities to recognise, prevent and intervene in the harassment and abuse of disabled people.

Figures released by the Association of Chief Police Officers (Acpo) showed that the number of disability hate crimes recorded by police in England, Wales and Northern Ireland rose by more than a fifth last year, up 21 per cent from 1,294 in 2009 to 1,569.

A spokesman for Acpo said that it was a crime that had been “significantly under-reported in the past”.

The EHRC investigation follows the devastating case of Fiona Pilkington, who killed herself and her daughter Francecca Hardwick in 2007 after suffering years of abuse and harassment.

The subsequent inquest concluded that their deaths had been “due to the stress and anxiety regarding her daughter’s future, and ongoing anti-social behaviour”.

For seven years, eggs and stones had been thrown at their house, their gates and fences set on fire, windows broken and they were taunted, insulted and verbally abused.

Her daughter had a learning disability and her son Anthony had severe dyslexia. It was later discovered that there was a failure by the authorities to intervene and protect the family.

Leicestershire Constabulary had been contacted on 33 separate occasions by Ms Pilkington or her mother. Leicestershire County Council social services department was also criticised for failing to refer Ms Pilkington for professional help after she told a social worker that she felt suicidal.

But in reviewing nine other cases in which people with disabilities had died or been seriously injured, the EHRC found that the experiences of Fiona Pilkington and her children were not isolated.

The report says: “In many other locations and circumstances, the appalling abuse of disabled people had been greeted with disbelief, ignored or mishandled by the authorities, with tragic consequences.”

Of the 10 cases looked at in this report, only five had been the subject of a serious case review or other external reviews, and there was evidence in some cases that the authorities had not made improvements.

Simon Green, of Bridgend in Wales, has been in a wheelchair for eight years because of a neurological disorder. He has campaigned for more awareness on this issue but says himself that it has not stopped him being a victim of abuse and he admits there are times he has not bothered reporting it to the police.

“When I first started using a wheelchair, I knew I might be patronised. But there are occasions when I have been on nights out and I have been tipped out of the wheelchair, I have been hit in the face, had drinks tipped on me,” Mr Green told Channel 4 News.

Mr Green said calling someone a cripple or a spastic is not just banter. “It is not funny to me, it is not a joke,” he said.

He also said that there was too much variation in the way police dealt with disability hate crime, an opinion which is confirmed by the EHRC’s report.

Mike Smith, who was the lead commissioner on this report, said that there had been many shocking findings.

Mr Smith said there now needed to be a national dialogue about how society perceives and treats people with disabilities and the criminal justice system needs to be more accessible and responsive.

More on this story